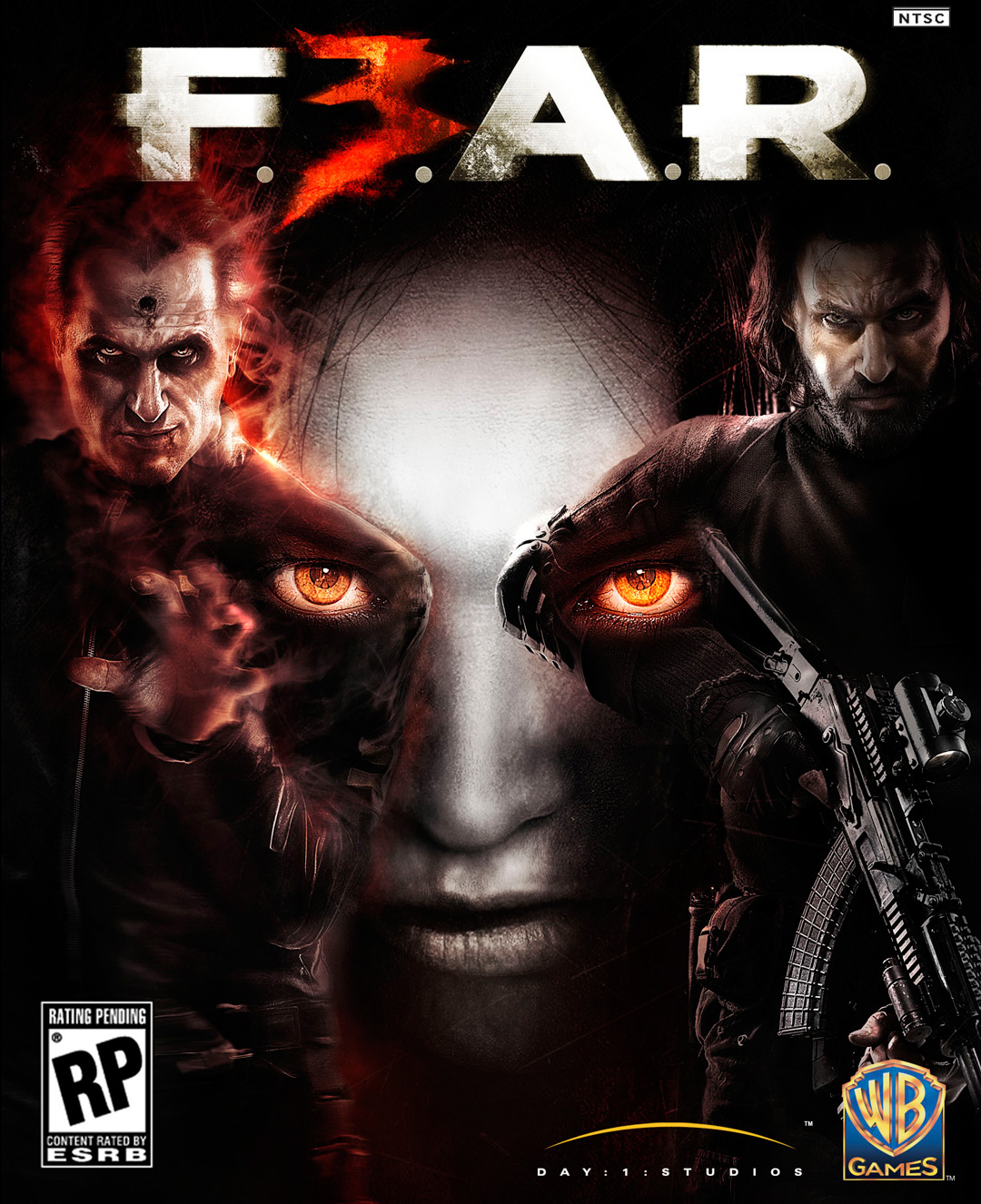 F.E.A.R. 3 (stylized in the logo as F.3.A.R) is a sequel to F.E.A.R. 2: Project Origin and the third installment of the series is a first person-shooter developed by Day 1 Studios for the Playstation 3, Xbox 360 and Microsoft Windows. It was announced on April 8, 2010 and has since been released on June 21, 2011. It includes John Carpenter working with the cinematics, as well as writing from Steve Niles.

F.E.A.R. 3 includes new features such as co-op and an evolved cover system, as well as new weapons. The player is able to control both the Point Man and Paxton Fettel, the protagonist and antagonist from F.E.A.R.: First Encounter Assault Recon, the first game in the series. The controls for the Point Man are the same, and include the ability to slow down time. As Fettel, the player can assist the Point Man by using telekinesis, stun, possession, and other abilities.

The Point Man and Paxton Fettel.

Nine months after the events of both games, the Point Man is captured by Armacham Security and interrogated in a South American prison. Paxton Fettel interrupts the interrogation and helps free the Point Man, and the two form an uneasy alliance, escaping the prison through the slums.

Commandeering a helicopter, the Point Man and Fettel return to Fairport to regroup with F.E.A.R. operative Jin Sun-Kwon. During their absence, the civilian population that survived the Origin Facility explosion were either driven insane by paranormal activity or were executed by Armacham Technology Corporation personnel. Fighting their way through, the brothers successfully meet up with Jin. She plays back recorded video footage of Michael Becket, who reveals his rape at the hands of Alma Wade and the impending birth of her child, and who is slated by Armacham for transport to an unknown location.

Using an automated transport, the Point Man and Fettel assault the local airport to intercept Becket, killing the remnants of Armacham personnel stationed there. In order to gain more intel from Becket, Fettel possesses him and reveals Becket’s past life to the Point Man, while Becket realizes the Point Man’s identity. Fettel’s release of Becket proves fatal, causing a gory explosion. The Point Man and Fettel head to an old training facility used by Harlan Wade years ago to study and develop the prototypes, where the two start to destroy items associated with memories of their childhood past. A lingering echo of Harlan Wade known as the Creep appears, taunting the brothers until it is finally killed.

Events in the final scenario are determined by which one of the brothers the player is controlling. Alternatively, if played during co-op, the player with the higher score determines the ending. The good ending will show the Point Man overpowering Fettel and vice-versa, with the ending story depending on whether the Point Man or Fettel had survived their final struggle. Shortly after destroying the monstrous apparition of Wade, one of two endings are possible, depending on multiple factors. For single-player, a good and evil ending:

The red sky signals the colliding of Alma’s world with reality.

The Point Man ending has him shooting Fettel in the head three times and watching his body spontaneously burn itself up. Then, as he walks over to Alma, ready to finish the job, he notices that her baby has been successfully born. As Alma fades away, the Point Man receives a transmission from Jin that everything is finally over. With the baby in the crook of his left arm, he leaves the room.

The Paxton Fettel ending has Fettel possessing the Point Man’s body and somehow extracting the baby from Alma’s swollen body. He promises to raise the child like it was his own, but sets it aside as he notices Alma. Fettel then pounces on his mother and begins to violently cannibalize her.

F.E.A.R. 3 has four game modes included in the Multiplayer portion of the game. Though Multiplayer requires at least 2 players, the game does have solo practice mode for Single player.

The first mode is called F**king Run!, and involves Alma’s Wall of Death chasing the members of the F.E.A.R. squad, forcing the team to reach various checkpoints. If one of the team members die, the game ends immediately.

The second game mode, Contractions, puts the player as a F.E.A.R. squad holding off Alma’s minions. The team must work together to build barricades and collect various weapons to fight off the 20 waves of enemies. The longer the team survives, the more the fog circles them, making it hard to see enemies. More difficult enemies begin to come out of the ever intensifying fog, such as Alma herself. Alma may be seen walking or even skipping around the map, but looking directly at her for even an instant will cause her to turn her gaze on the player’s character, leading to certain penalties, such as reduced speed, being blinded temporarily, and being thrust to the edge of the map, forcing the player to fight their way alone back to the team.

The third game mode is called Soul Survivor. As another member of a F.E.A.R. squad, the team has to fight off waves of enemies. Alma will corrupt one of the teammates, or perhaps even the player’s own character. If the player’s character is corrupted, they will be tasked with breaking members of the squad off in the hopes of corrupting them. The last F.E.A.R. squad member alive is the Soul Survivor.

The fourth game mode is called Soul King. All of the players start off as a Spectre. Players fight to possess or kill as many A.I. humans as possible. If the player dies, half of the “Souls” that are collected from fallen specters or humans are lost. The player with the most souls at the end of the round is crowned the Soul King. 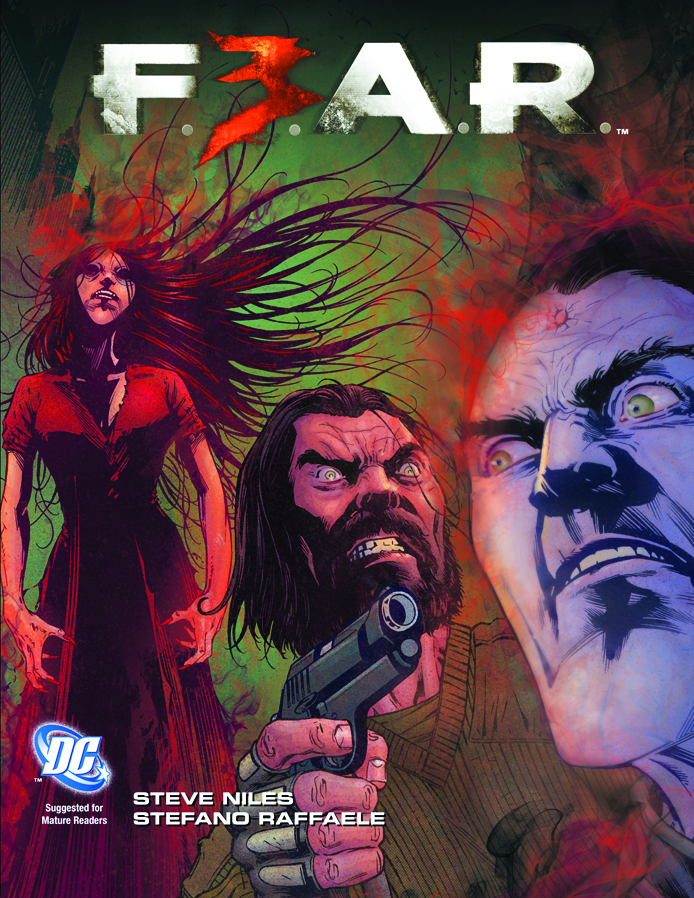 There is a 12 page comic book made by DC Comics for F.E.A.R. 3 with the pre-order from Amazon. The comic is a prequel to the events of the game.

Rumors of a sequel to F.E.A.R. 2: Project Origin were leaked via NeoGAF forums due to a “Next Issue” image of the March issue of Spanish v >[1]

The new sequel, titled F.E.A.R. 3, was officially announced on April 8, 2010, [2] [3] along with its trailer. [4] The game was developed by Day 1 Studios, in collaboration with Monolith Productions. The gameplay was advertised as featuring a “Generative Scare System” to change the placement and timing of enemies “on each playthrough”. [5]

The release of the game was pushed from March to May 2011 [7] , shortly before a collector’s edition was revealed, featuring a pregnant Alma figurine.

On June 17, the game was available for pre-order on Steam and then finally released on June 21st on all consoles.

GameSpot gave the title a 7.5/10 rating, criticizing its visuals and lack of scares, but praising the shooting mechanics, co-op and multiplayer components. [15]

Generally favorable reviews – based on 71 Critics What’s this?

Mixed or average reviews – based on 141 Ratings

Mixed or average reviews – based on 141 Ratings

Definitely a little different than the F.E.A.R we;re used to. The point system and scores for each chapter gives a slight arcade like 8.5

Definitely a little different than the F.E.A.R we;re used to. The point system and scores for each chapter gives a slight arcade like feel up front, but after the first 2 chapters or so it changes from a negative to a positive. The single player campaign comes off as a typical FPS to start off but the atmosphere and overall creepiness of the game starts to unfold in chapter 3 and is what makes this unique from you typical FPS. The cut scenes between chapters are done very well in my opinion, not so much in looks but in the feel, mainly from Paxton since we don’t hear from point man. I am only halfway through but the way the single player is going this could be a superb ending to the F.E.A.R series (although I doubt it will be) I say it could be a good ending due to the slight revamp I feel the series has undergone. The scariness has been diminished slightly due to the fact this is the third time we’re getting scared in this fashion, Sure it’s a little disappointing when we think of how badly the first game scared us but this is by no means the creators faults, this is our own desensitization, but I feel they knew they couldn’t scare us like they used to and worked with that idea to make other aspects better. For example the mulitplayer. The online modes of F.E.A.R 3 are a refreshing take on FPS online games. The modes are hectic, fast paced, and can be played strategically or lazily with no loss of the “fun factor”.

I will admit the graphics could be a little better and the campaign has some dull moments, but the ability to play as paxton and the option of co op gives an incentive to play the campaign at least a second time without making it feel like you’re playing the campaign over again. … Expand